I wanted to further the idea of the bread men ‘talking’ and Ali in ‘Make’ came up with a bit of wizardry. First we needed to introduce something metallic so the bread man got a ring through his nose! Then I had to buy this small sound board which  you can load the sound file onto and then connect it to a small speaker or headphones.  Once its all connected up and a small battery added, whenever you touch the metal ring, it plays the sound bite!

Ali suggested I could get a bigger sound board and could theoretically  have about ten bread men all talking. 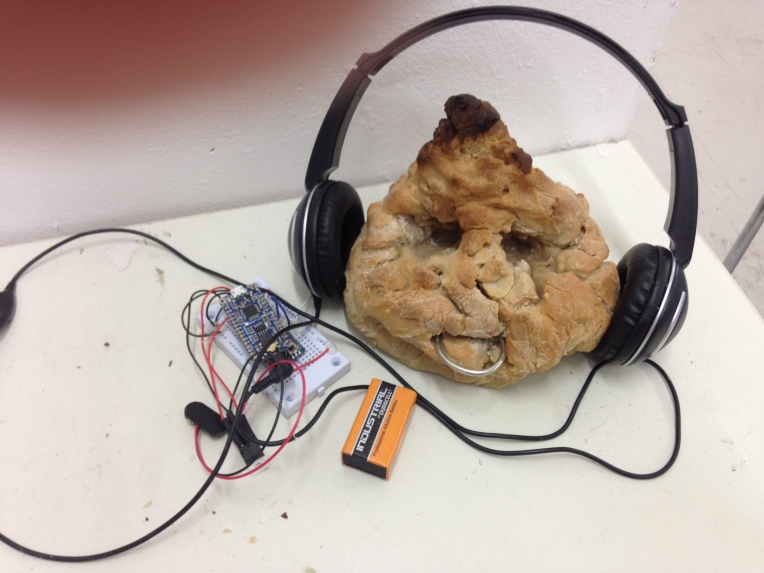 This bread man was made with a recipe called pate d’or, its modelling dough and has butter in it.  It makes it smell very nice, like a pastry.

It holds its shape better and holds the marks of the artist. This was in the oven for about an hour with no intervention at all.  The eyes and the mouth both subsided . It makes him look like he is in pain, got his eyes shut or is blind.

The surface is very smooth compared to the last bread man which was cracked, rough and uneven.

I cut into the mouth just after it came out the oven but I don’t like it. It looks contrived.  I can put objects in during cooking to keep the eyes and mouth   open. The last time I used some cashew nuts.

I was doing one of my HOWGOZITs in the New Year and realised, my direction is altering slightly. For a while now I have felt the ‘heap of dough’ was a bit problematic, the mound of dough was not really ‘cutting it’ for me or producing a shape I liked.   Also the big heap of dough at the end of the project was going to be quite difficult to deal with so…… I was busy making dough in the kitchen one evening and I realised the need to make bread men is quite compelling!  He’s there before I know it!

And they have been staring me in the face for years on my msn profile. They just come out of me, when I am making them I just ‘know’ when they are right or finished.   I want to see what ‘bread men’ other people make……

So my plan is to do an in-depth bread session with one of my peers and try and analyse what is going on by filming and transcript  and by getting feedback from them, how they felt doing it.  Then have a session at uni with maybe 4 students, one-to-one, as part of an activity day with Julie and Jonathan.

One of the problems of working with dough and bread is the sculptures go mouldy. While this is sometimes desirable if it is to be part of the artwork concept, sometimes its nice to have a little keepsake so I am looking at ways of preserving them.  Anthony Gormley used paraffin wax in his bed bread project, he dipped all the pieces of ‘mother pride’ in wax. 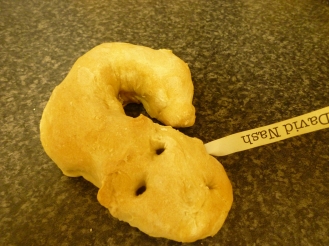 I am experimenting with various things:

The effect of the varnish was interesting in that it gave  some the look of ‘ceramics’ .

The first dough burning experiment took place up in Nairn on 16th November.   It took a while to burn as it was still moist inside but it went in the end.  Looked like roasted meat at one point and then just like charred wood in the end.

Video of the process
We filmed making dough with my iPhone. It was interesting to focus in on just the hands. Here are two videos on me and my colleague Craig making dough.

And heres two wee men that popped up… (as they do).

Over the last two weeks, I have started making dough with my peers at Dundee Art College and making a pile of dough at home , experimenting with dough with and without yeast and trying to get it into a mound/pile.

The pile with yeast was interesting.It had a nice puffy aerated feel to it and had some nice ‘tracks’ on it after 24 hours. But not good for making into a mound, very runny.

Next was just flour and water. Toasting it with a hot gun had a bit of success but in the end I had to put it in the oven and keep pushing it up into a pile every 10 minutes. It was very hot work, I was sweating and  struggling with the dough but somehow it felt good, cathartic.  Heres the first wee pile of dough: 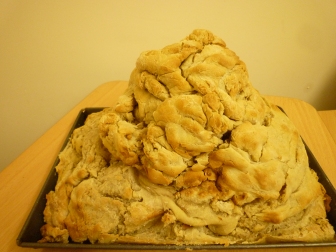 This experiment now begs a few questions. Should I go back to making modelling dough ( made with butter) ? Do I need to make a central core of maybe chicken wire to support the structure as it gets bigger?   On site toasting with a hot gun might not be powerful enough, I might have to get some sort of blow torch.   Next plan is to make a pile of dough at college with students and find some expertise on getting the support structure.

This is my project for this year and next.  Below is my proposal form:

This installation is a combination of a social experiment and a mission to make a big dough sculpture. The project will run for a month during the Edinburgh Fringe in August 2016. It will be part of the free fringe. Ideally it will be housed in a semi-outdoor venue eg. Gorgie Farm is a free fringe venue with stables outside.

Twice a day, I will invite participants to make dough with me and have a chat about whatever comes up. ( This may be totally random or there might be props, pictures, items around to maybe lead conversation in a certain direction). At the end of the sessions, I will make notes on the conversations (with permission) and this will go on to be a further piece of artwork. Filming and stills will record progress and process. At the end of the dough making session, the dough will be placed in a pile which will grow over the period of the festival . There are various ways for the mound to grow. I imagine firing or toasting it daily to shape and stabilise it. There would be the option for participants to put objects in it, inside it, sticking out of it. They could also write comments, feelings on a piece of paper, knowing they would be burnt at the end. From previous experience with dough, firing it on the outside leads to some very interesting shapes ‘inside’ when you expose them.

At the end of the project, there might be a ceremonial burning. It needs to be brought to a close.

Rationale for this project:

I am currently studying an MFA in Art, Society and Publics at Dundee College of Art. I studied sculpture at Edinburgh College of Art. I like to use dough as my ‘medium’ and have made a series of bread bodies .

“Dough is a lively medium to work with. It can be quite sensual, rolling and squeezing it, or it can be very cathartic thumping and punching it. It smells good. You can cook it and it can be quite unpredictable especially if you put yeast in it. Then if you leave it for a few weeks, the patterns, colours and textures of the mould are fascinating! “

Permanent space for the month